On Saturday I attended the Pedagoo conference.  It was a great day and opportunity to touch based with Twitter colleagues.  Having been to a number of these now, I am always quite choosy where I go opting for the more practical of sessions especially if I am promised something I can take away and use in the classroom.  With this in mind I chose the session on Foldables run by Karen (@KDW_Science).

After explaining to her eager audience what foldables were, Karen demonstrated with a few examples she had prepared before allowing us to roam freely.

I had a little play around and came up with two ideas on how I could incorporate foldables into my teaching:

This week, I trialled the use of foldables to help students construct their PEE paragraphs.  We read the chapter that I wanted us to cover and then I let the students choose a sheet of coloured paper.  This alone engaged their interest as they tried to work out what they were going to do.  I told them to fold their piece of paper just short of in half, demonstrating with the enthusiasm of a Blue Peter presenter.  I then asked them to cut three slits to make a three door foldable.  On each door I asked them to write ‘Point’, ‘Evidence’ and ‘Explanation.’

We then worked through on producing one door at a time.  First the point 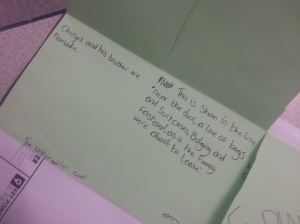 And finally the explanation 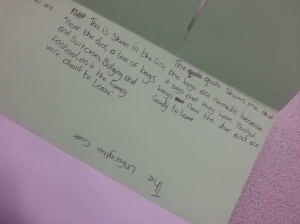 I was really impressed with my year 7 classes first attempt at this and it definitely helped box out each stage of the PEE paragraph for the students.  They felt more confident in knowing what was expected from each stage.  You could even write down what they should be doing in each stage underneath the door itself.

Next time I may get them to stick little squares of colour – one colour for each stage to make the three doors even more distinctive.

Next week I shall be trialling the layer book with my year 11s and will update the post then.  Massive thanks to Karen for an inspirational session.